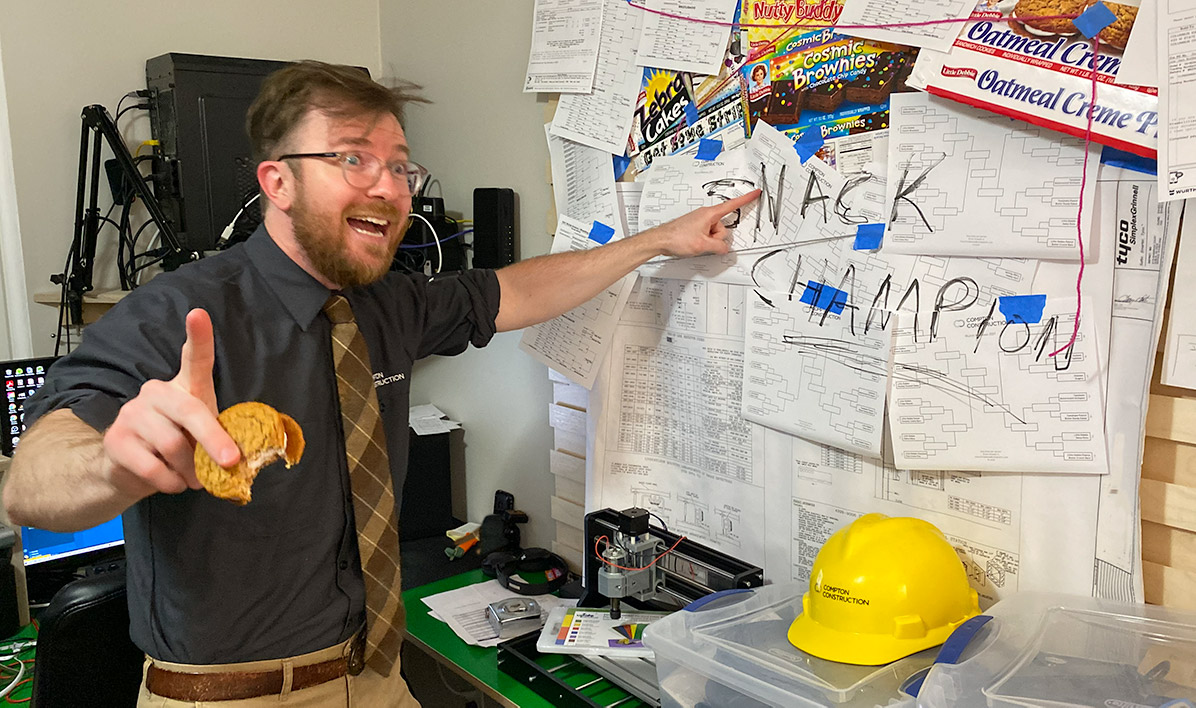 Recently another type of tournament went down in the snack drawer at Compton Construction’s office. 16 different boxes of snack cakes went head-to-head in a single elimination tournament to determine Compton Construction’s Snack Champion. Check out the bracket and send your predictions of how the games played out for a chance to win a Compton t-shirt and a box of the Snack Champion.

Fill out this PDF bracket and email it to munchmadness@comptonllc.com before noon Eastern on Friday, March 26, 2021. A photo of the printout or any variant will be fine. One entry per person. To keep things simple, scoring will be 1 point for each correct First Round selection, 2 points per Quarterfinals winner, 3 points per Semifinals winner and 4 points for picking the Champion. Winner will be decided on March 31.

Notes from the commissioner

Working at a small business, I carry several titles (accountant, carpenter, photographer, reception). I recently gave myself a new title: tournament commissioner. The fun part, at least to me, was my coworkers were completely in the dark on my new promotion. One of my duties is keeping up the office and that includes a pretty well-stocked snack drawer. On a given day, you’ll find bags of chips, Jolly Ranchers, assorted nuts, Slim Jims and in the case of today, Easter candy. Building things makes you hungry.

Because of a pretty steady rotation, Compton employees didn’t notice that, when I started working snack cakes into the mix, they always came in pairs and left in pairs. Unwittingly, they were the judge and jury of Munch Madness at Compton Construction. I kept tabs regularly on the participants and determined winners and losers of each round. This process began early in 2020 but like many other spring tournaments that year, it was abruptly halted. We picked back up recently and have a Snack Champion. By March 31, I’ll be revealing all of the matchups and their outcomes.

How were participants determined? How were they seeded?

Were these regulation size snack cakes?

Yes, these were all the standard-sized snacks. None of those giant Oatmeal Crème Pie abominations or family packs.

Snack cakes come in different amounts per box. How was this accounted for?

And some schools have better recruiting, scholarships and boosters. Whatever number showed up in the box played the game. First to zero wins.

Did the commissioner play any favorites?

The commissioner did not participate in the competition. He provided his own Oatmeal Crème Pies outside of the tournament and only ate from the losers after their game had been determined.